The Genelec 5050A active subwoofer is designed to complement the low frequency response of the Genelec 6020A loudspeaker. The 6020A and 5050A package offers a dynamic, detailed and refined sound field with a flat and wide frequency response extending from 26 Hz up to 20 kHz. Because the 5050A is designed to work with the 6020A as a complete system, installation and setup is very quick and easy for any stereo or multichannel application. 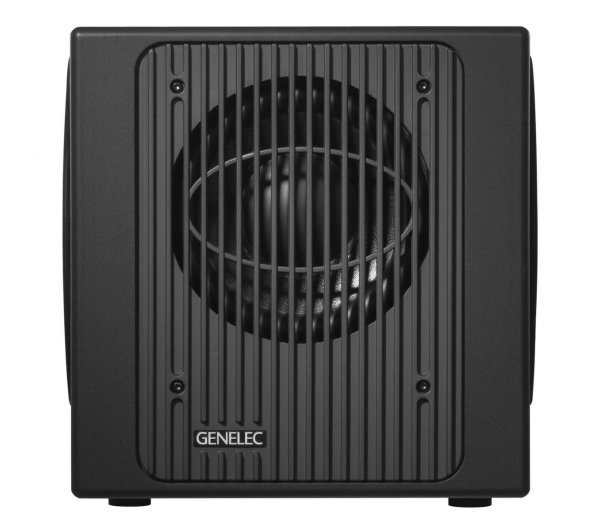 In a typical 2-way system the active crossover needs two power amplifiers — one for the woofer and one for the tweeter.

Each transducer is driven by its own optimized amplifier.

When working in critical audio production environments it is essential that monitoring systems remain reliable and functional at all times. One of the main reasons behind Genelec’s excellent success in broadcasting environments is the reliability of our products and a key element behind the reliability is the internal protection circuitry found in all products since 1978.

The protection circuitry prevents driver failures by detecting signal levels, and in case of sudden peaks or constantly too high levels, taking the signal level down automatically. Of course this feature does not affect the sound quality in any way when working within the specifications of the loudspeaker, but only prevents inadequate input signals from breaking the loudspeaker.

The interaction between room acoustic and loudspeaker radiation is complex. Each room changes somewhat the monitor’s response in a unique way, e.g. reflective vs. damped rooms, or placement against a wall vs. on a stand away from the walls.

All Genelec loudspeaker systems feature room response adjustments to compensate for the room influences and retrieve a flat frequency response at the listening position.

At low frequencies two main controls are provided. The Bass Tilt control, which acts as a shelving filter together with the Bass Roll-off control allowing you to optimize the low and very low frequency response of the system in different installations. Bass, midrange and treble level controls are provided in large systems. These controls allow to optimize the relative balance between the various pass bands.

The operating manual and datasheet of each loudspeaker contains a list of preferred room response control settings for different installations. These have been specified out of long practical experience and measurements of various kind of typical acoustic environments.

Genelec AutoCal provides the industry’s first integrated process for complete automated measurement, analysis, and adjustment of every monitor on the GLM control network. The system measures the response in the listening area and applies relevant compensation in the low and low-mid frequencies to minimise the detrimental room acoustic anomalies as well as the differences between various listening positions. AutoCal also aligns relative levels, time-of-flight, as well as adjusts correct crossover phase (called AutoPhase) for all subwoofers on the network.

The Acoustic Response Editor provides accurate graphical display of the measured response, filter compensation and the resulting system response for each monitor, with full manual control of acoustic settings.